Barolo is the flagship of Piedmontese wines, but to truly enjoy it at its best, simply popping a bottle open won’t quite hit the spot.

1 ) Liked by many, unlike any other

Barolo is based on Nebbiolo, a famous vine type used for other top regional wines like Barbaresco, Gattinara, Carema and Spanna.

2) The Count of Cavour and the Marchioness of Barolo

Regardless the Langhe region having been the home to Nebbiolo vines for millennia, it wasn’t until the early 1800’s that Barolo became what we know it to be today, much owing to the Count of Cavour – the mastermind behind the Italian Unification, who hired famous French oenologist Luis Oudart and had him coming to these tame hills south of Turin to introduce him to the Marchioness of Barolo, by then just the name of a feud. The noblewoman allegedly gave credit to the French expert and it was from her cellars that the first proper Barolo was bottled. 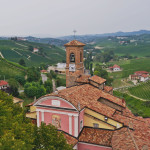 3) A wine worth the wait

Barolo requires a minimum of three years ageing and it best performs not earlier than 10 years. Like any star, Barolo does know how to tease a crowd.

Barolo owns a ahndsome, rich texture and will find its perfect match in red meat – roasted, braised- and above all, game. A rather easy, if lengthy, recipe and an absolute classic of Piedmontese cuisine is the Barolo braised stew, prepared by marinating Piedmontese beef in Barolo wine for half a day at room-temperature to then slowly stew it over several hours.

Barolo is a statement besides being a wine: its history is the one of its region, the Langhe, and it is bound to the choices made by men like Bartolo Mascarelli, Renato Ratti, Luciano Sandrone and Elio Altare to quote a few – names that won’t sound familiar but are the reason why the Barolo became and international top brand without sacrificing its identity, as quality has always been at the core of heated disputes among traditional and innovative local producers.

Barolo can by no mean indicate a specific definition: the Barolo region in fact includes over 181 distinct geographic producers, which means you have the chance to try and discover shades and tastes derived from a varied micro-climate and heterogenic soil composition.

7) King of Wines, Wine of Kings

Dumb-struck by Barolo, King Albert of Savoy decided to buy the Verduno castle, where General Staglieno, an expert wine-maker, managed to produce first-class Barolo vintages. Following his father’s footsteps, Vittorio Emanuele II, next in the line of 1800’s Italian kings, took interest in Barolo by the Fontanafredda estate, where his most well-known lover, Rosa Vercellana, would also be conveniently hosted, to later be appointed Countess of Mirafiori and Fontanafredda.

In the late 1800’s, chemist Giuseppe Cappellano began the production of Barolo chinato, a traditional remedy for colds and poor digestion. Besides its more or less confirmed healing features, the Barolo Chinato still is an elegant bitter-sweet dessert wine.

Barolo is produced in 11 Langhe districts. On a classic tour you will make sure not to miss  La Morra, Monforte d’Alba, Serralunga, Castiglio Falletto, Novello, Grinzane Cavour and, of course, Barolo.

On the Tracks of a Beautiful MindA journey to Ivrea, where 1950’s entrepreneur Adriano Olivetti implemented revolutionary industry models yet to be matched