Romance and Nature: the Blue Ring by Lake Orta A thousand years of history to discover, plenty of routes and boat-trips in the untouched nature and hikes to time-frozen hamlets.

The Lago d’Orta is a perfect main destination for a short vacation or an endless source of day-trip destinations over a longer holiday. Romantic, active, history rich, Orta will suit all kinds of visitors and provide fun, sun and action all within modest distance.

Perfectly placed at the centre of lake Orta, the isle of San Giulio used to be the Duke’s residence under the Northern Langobards Kings rule in the early Middle Ages, while it presently hosts the quiet and unseen nuns of a cloistered convent. Before to step ashore, though, look back: the island offers a perfect grand angle point of view to gaze at the whole landscape spreading out from the lake.

Now walking in the church of San Giulio, you get the chance to look at original documents dating as far back as San Giulio (RIP 390 AD) who, as the legends goes, landed on the island and chased away the dragons haunting it, eventually founding his hundredth church.

Until 1767, the island’s castle, later converted into convent, used to be the symbol of the Riviera San Giulio – an actual tiny, independent state ruled by the Bishop of Novara. Being thus a long-established core political site, as you take a break and sit back in one of the local cafes, you can still picture the several sieges the island had to face throughout its history – among which the 962 attempt by Holy Roman Emperor Otto I to seize the stronghold.

These are the same halls where Willa of Tuscany would probably be found pacing after she had fled from the court of Pavia and where she had hoarded good part of his husband king Berengar’s crown treasures. 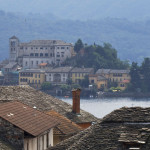 The Old Town of Orta

Back to present day, on the eastern shore of the lake lies the town of Orta, among the most well-preserved ancient boroughs in Italy. For architecture lovers, it won’t take long to unexpectedly reminisce of Assisi, once they enter a peaceful, iconic urban scenography leading up on the top of the old town: the Sacro Monte, consecrated to Saint Francis and progressively brought to completion between the 1500’s and the 1700’s.

“Quiet and peaceful, the overlook from Sacro Monte’s belvedere grants a once-in-a-lifetime landscape to contemplate”.

All over the lake area it is possible to take wonderful walks in a blooming natural environment and to take your breaks by the many artistic sights plunged in the bright, relaxing hills and woods. Daily routes will take you to the frescoes inside and on the outer walls of the Luzzara church on the west bank, or to marvel at the time-froze, steep houses of Ronco, crammed on top of each other making unthinkable any urban planning project whatsoever.

Again on the eastern side of the lake, the Buccione Tower still stands on a hilltop, surrounded by a sanctuary – Here the watchmen would scan for approaching foes of the Riviera San Giulio. Not far, you can take the time to amuse yourself at the bizarre course of the Nigoglia brook in the town of Omegna, a local attraction since its waters actually run from the lake to the mountains.

Italian modern literature connoisseurs will say – oh, no way, didn’t know that. Look where the guy was born! once they find out this is the birth-place of 1960’s writer Gianni Rodari. 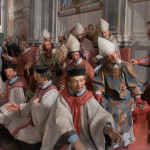 The Blue Ring: a relaxing way to see it all

There are plenty of hiking paths and routes to enjoy the Lago d’Orta, but the most popular is the Anello Azzurro, following which you will get a comrpehensive tour of what’s there to see, from natural highlights to the main village attractions. Additionally, the Ecology Museum – Ecomuseo del Lago d’Orta e Mottarone is the core of the region’s preservation and improvement policies for the territory and its cultural and natural resources.

The Museum, on top of the Montarone mount towering the lake with its 1492 mt height- offers information about events, itineraries, wine and food tasting and outdoor activities. A marvellous hike through its web-work of footpaths up to its summit will grant as a reward a breath-taking overview of the whole Alpine mountain range, of the lake region below and further down to the southern plains.

Fun stuff to Do Round Lago d’Orta: